The nurse brightening the lives of aged-care residents

Kersten Davis hasn’t even finished her HETI Higher Education course yet but it’s already played a significant role in her getting a promotion.

I finished my nursing degree in 1988. I subsequently did some courses in remote area health and palliative care, but it had been a while since I’d been a student when I started the HETI Higher Education's Graduate Certificate in Applied Mental Health Studies with a specialisation in older persons in 2019.

I enrolled because, after working as a dementia-behaviour-management clinician for several years, I wanted to understand how to support people living with dementia who also present with mental illnesses such as anxiety and depression.

The course has been fantastic. Everything I’ve been taught so far has been evidence-based and relevant to my work. I’ll often learn something one day then apply it at work the next day. I’ve started telling colleagues that the course should be made compulsory for anybody who works in older people’s mental health!

I’d only briefly worked for NSW Health early on in my career before getting my current job. So, getting the opportunity to learn more about governance and professional standards in the public system was great.

I’ve learned how to be more mindful when interacting with older people as a result of doing the course. To take just one example, after completing the trauma-informed-care unit I became much more conscious of retraumatisation. You always need to be mindful of how the ageing process and complex clinical health issues can combine to impact someone’s mental health.

Of course, that seems obvious when it’s pointed out to you. But it’s not something you’d otherwise have front of mind when you’re interacting with an older person who appears to be depressed because of a recent event.

I’ve found interacting with a variety of healthcare professionals in a relaxed, study-group setting has been enlightening. I’ll often find myself in a video-conference call with, for example, a psychiatrist, a psychologist and a childhood mental health nurse. Those discussions have given me much more insight into the perspectives of the colleagues I work with on multi-disciplinary teams.

I’m only at the halfway mark, but the course has already had a significant impact on my career. It played a big part in me recently getting promoted to a more senior role. That role involves working alongside the Primary Health Network . I’m helping it roll out psychological supports in residential aged care facilities around my local health district. I’m now much more confident about my foundations in mental health. That means I’m much more likely to apply for positions in other streams of mental health in the future.

An impressive return on investment

I’d done some of its online webinars in the past, but this course was the first time I’ve had much to do with HETI. I’ve been impressed by how everyone there has treated me. The scholarship application process was quick and easy. I just had to get a referral from my manager and submit a form saying that I’d moved into a mental health role and needed appropriate training. A few weeks’ later I was accepted.

Looking back, I realise that if HETI Higher Education hadn’t offered to cover much of the cost of the course, I wouldn’t have done it. That would have meant missing out on the opportunities that have materialised over the last 18 months. 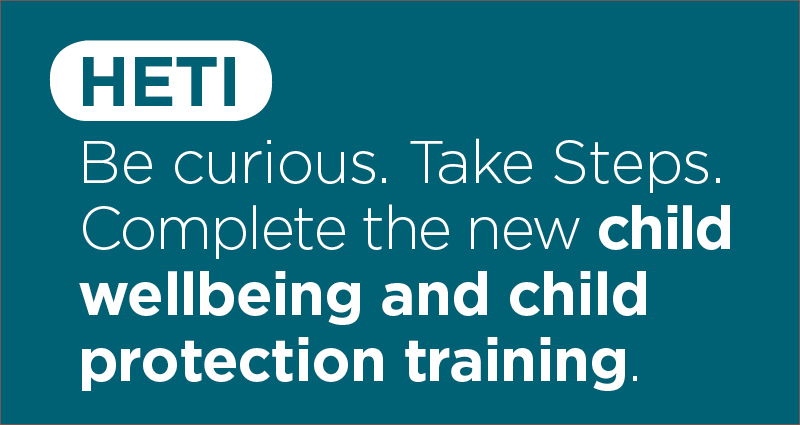